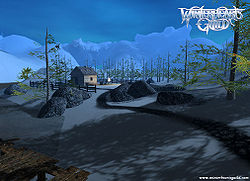 Winterheart's Guild is an Action role-playing game in development by Zelian Games. The game is based on the power metal band Sonata Arctica who provide the player characters and the soundtrack for the game.

The game plays in the distant future, the world has been annihilated and has fallen into a nuclear winter. In the decimated population, several factions vie for power. The Free are a group of people who choose to live in peace and harmony, instead of joining the rising factions in their war. Winterheart's Guild was formed in an attempt to stop any faction from getting full control, and to lead the Free.

Some fans have been known to voice their objections, based on the following information, presently known about the game:

Retrieved from "https://futuregames.fandom.com/wiki/Winterheart%27s_Guild_(video_game)?oldid=6545"
Community content is available under CC-BY-SA unless otherwise noted.